My niece, Ansley, read Flat Stanley with her class at school. Her teacher, Mrs. Boyd, had them create their own flat person and send it out on an adventure. And, that is now Flat Ansley started her journey to see us. Here is her story and some pictures of her journey. Enjoy!

There once was a girl named “Flat Ansley”. (This was quite a proper name as she was small enough to fit into envelopes and slide under doors!) She lived in Dacula, Georgia and had all kinds of fun with her friends. She liked to play tennis and swim. Playing the piano, dancing and singing were also some of her favorite things to do. Flat Ansley loved going to school to learn and play with her classmates. But, one day, she decided it might be fun to go on an adventure! So, she tucked herself into an envelope and mailed herself off to visit her Aunt Christy and Uncle Nickadino in Illinois. 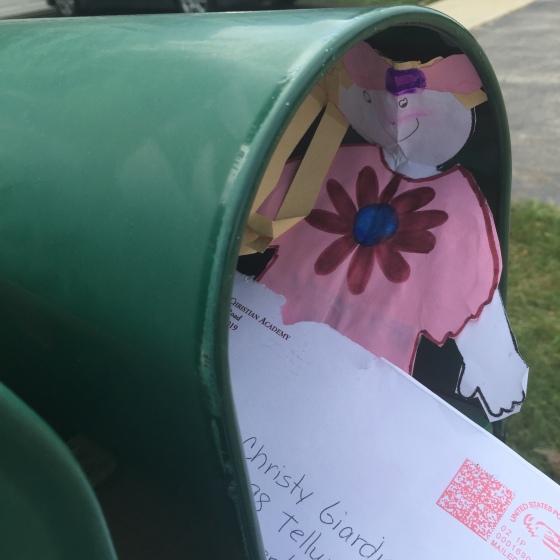 One really great thing about being so flat that you can fit into an envelope is that it makes travel very inexpensive!  Flat Ansley made it all of the way to Gilberts, Illinois for only $0.46!  She left Dacula on September 8th and arrived in Gilberts on September 12th – 5 days of travel.  She could have gotten to Illinois faster if she had come in a car or in an airplane, but it would have cost a lot more money! 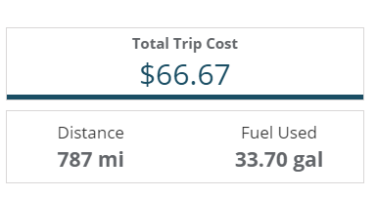 However, since Flat Ansley doesn’t drive quite yet, it might have been more likely for her to take a bus from Atlanta to Chicago.  (Of course, someone would have to give her a ride to the station and also pick her up when she arrived.)  That would have cost about the same as driving, but because the bus stops along the way to drop off and pick up passengers, it would have taken a little longer – a little more than 16 hours – and she would have traveled overnight and had to sleep on the bus.

A train might have been a fun adventure, but it is pretty expensive, too, and would take almost 14 hours.  The train runs overnight as well, but unlike the bus, Flat Ansley could have purchased a private room for sleeping.  The regular seat on the train costs $228.00 one way and the private room costs $618.00.  That’s a lot of money for 1 night of sleep!

The fastest way to get to Illinois would be by airplane, but it is also the most expensive. It would cost her $213.10 to fly from the Atlanta Hartsfield-Jackson International Airport to the Chicago O’Hare International Airport.  But, it would only take her 2 hours and 3 minutes from the time the plane left Atlanta until it landed in Chicago. Now, someone would still have to take her to the airport and pick her up, but it would still be faster than all of the other options.

So, as you can see, although it took the longest amount of time (5 days) to travel to Illinois in an envelope, it cost less than $1!  This leaves plenty of room in Flat Ansley’s budget to have adventure after adventure!

The first friend Flat Ansley made when she arrived was Aunt Christy and Uncle Nick’s Jack Russell Terrier!

Now, there’s something funny about this dog that might surprise you…her name is Kitty!  Flat Ansley was a little confused at first, but then she just thought it was really funny.  (People don’t expect to see a dog come running when you yell the name “Kitty”!)  But, no matter what, it’s always great to make a new friend!

Uncle Nick and Aunt Christy live in the Midwest portion of the United States.  Traditionally, there are a lot of manufacturing companies, and they both work in different kinds of manufacturing jobs.  Flat Ansley was so excited to go to work with them and learn something new.

Uncle Nick went to college to become a mechanical engineer.  He loves to take things apart to understand how they work.  He loves to fix broken things and invent new ways to solve problems.  Right now, he works for a company that designs equipment for companies like Starbucks, Coke, Pepsi and many more.  In his career he has designed ice makers, refrigerators, coffee and juice machines and worked to solve many problems for customers.

When Flat Ansley arrived at Uncle Nick’s work, she went straight to his office. 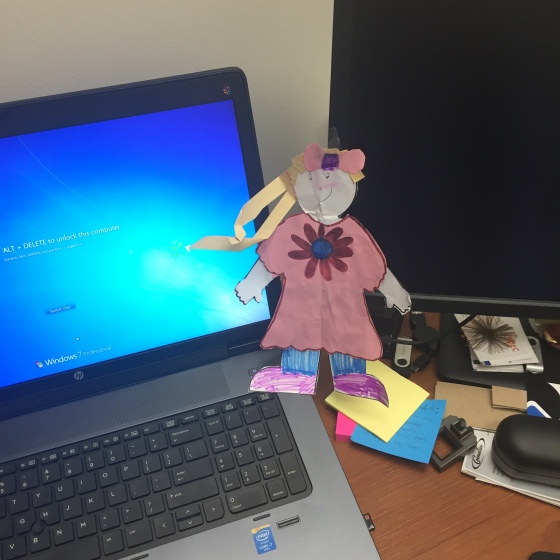 The problem Uncle Nick was trying to solve that day was a problem with filters for a coffee machine for Starbucks.  He even let Flat Ansley peek through the microscope! 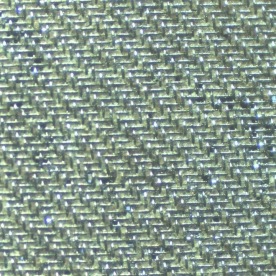 It’s kind of cool to see things made that much larger!  Flat Ansley wasn’t much help in solving the problem, but it was cool to look anyway!

Being an Engineer also means a lot of math and studying of charts and data.

After checking out Uncle Nick’s office, they took a trip to the production floor to see where the designs become reality.

The first project that Flat Ansley got to see was top secret, so she can’t really talk about it.  But, she got to have a cup of coffee made from it. (And it was delicious!)

And, this machine needs so much power that it requires a power cord almost as big as Flat Ansley!

The next project Flat Ansley got to see is already in several Starbucks stores.  This machine is called “Fizzio” and it adds carbonation to flavored drinks.  This allows Starbucks to sell sodas to people who don’t want coffee. 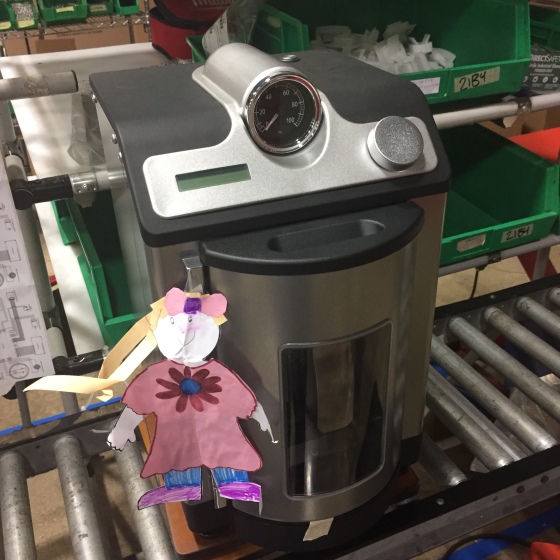 And, finally, Flat Ansley got to see the inside of a new machine for Pepsi called the Spire.  It was so interesting to see how big machines like this are put together in a manufacturing plant.

Thanks, Uncle Nick, for showing me some of the things an engineer does all day.  I love to invent things and solve problems and puzzles.  Maybe, one day, I’ll be an engineer too!

Another day, Flat Ansley got to go to work with Aunt Christy at a plastic injection molding company.  At her company, workers turn plastic beads into parts you might find in your house or on the shelves at Home Depot.  Aunt Christy is in charge of Human Resources (which is just a fancy title for taking care of people and helping solve their problems) and also all of the technology in the building.  Because her job deals with helping people with questions about their money, insurance and other personal things, we can’t really talk about what happens in her office.  But, Flat Ansley did get to take a tour of the plant and see how parts get made.

First of all, Flat Ansley attended the daily production meeting where everyone comes together to make a plan for what’s important that day. 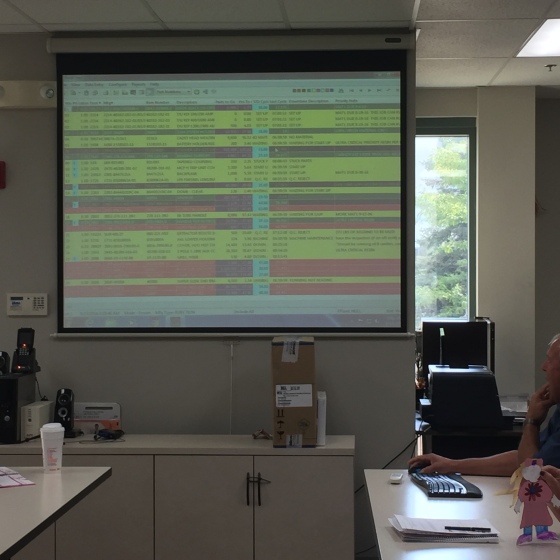 After the production meeting, Flat Ansley went to the manufacturing floor to watch how Closetmaid Anchors get made.  (You may not think you know what that is, but if any of you have white wire shelves in your house, Aunt Christy’s company makes the parts that hold them to the walls.)

First, Plastic Pellets, or Raw Materials, are mixed and then brought to the manufacturing floor.  Look how much material there is for the parts they will run today:

This plastic gets pumped into a big machine, melted down, and pressed into the tiny anchors you see in your house.

Watch out, Flat Ansley!  Don’t get sucked into the machine! 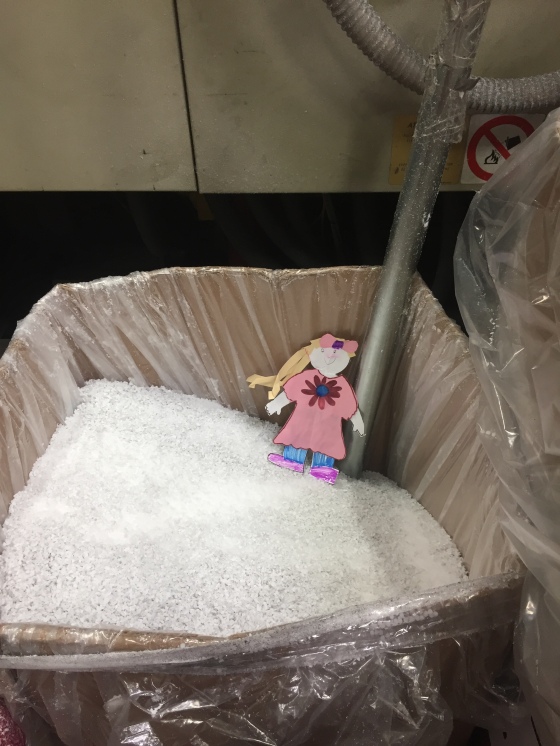 They come down a conveyor belt and into a giant box to be delivered to the customer.

At the end of the day, Flat Ansley lead a meeting to let the team know they were doing a great job and she learned so much!

Uncle Nick and Aunt Christy like to do all kinds of things during their free time.  They work on projects and teach at church.  Flat Ansley got to see a little bit of what that was like.

She went with Aunt Christy to a Leadership Conference at Church where they learned how to resolve conflict and fight fair.

She also got to help Aunt Christy make a birthday present for Addison’s friend Lauren. 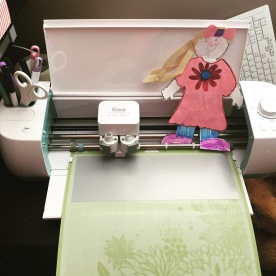 Flat Ansley helped Uncle Nick in the Garage building tables for an apartment building in Minneapolis. 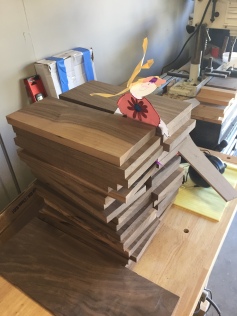 And, for her final adventure, she rode along with Aunt Christy to deliver the tables.  They also got to stop at the Mall of America and visit the Lego store and the American Girl store.  It was quite a trip!

She even got to see the Pepsi machine like the one being built at Uncle Nick’s work at a restaurant at the mall!

It’s starting to get cold in Illinois, so it’s time for Flat Ansley to head back to the South.  What a good time she had hanging out with Aunt Christy and Uncle Nick and learning all about their life in Chicagoland.  Maybe, on her next trip, Flat Ansley will get to go into the city and visit the amazing museums, theaters and restaurants.  (That may not sound like a lot of fun, but trust me, in Chicago it is!)

Until the next adventure, Flat Ansley, we will miss you and we’ll be watching for you in the mail!